Paliouriis located on the eastern end of the Kassandra-peninsula and includes several smaller settlements out of town. The village itself exhibits a very beautiful square surrounded by cafes, narrow streets, old houses and traditional flair. The area around Paliouri is characterized by mountains, pine forests, great natural formations and beautifully lagoons. With its tranquil shores… 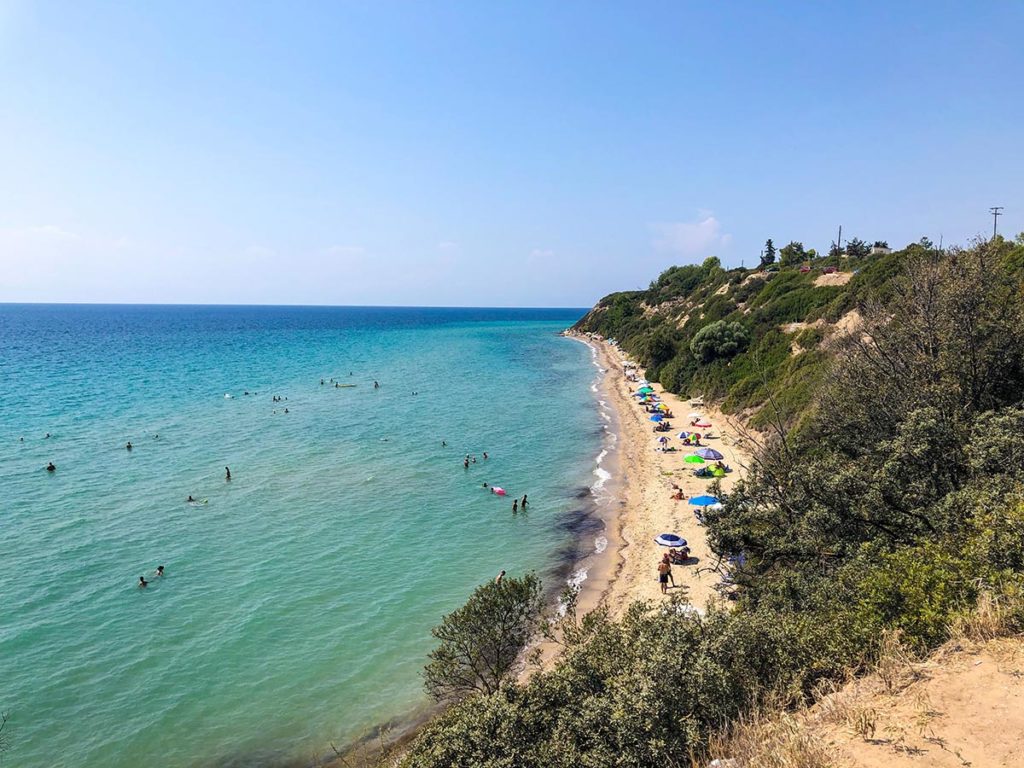 Paliouriis located on the eastern end of the Kassandra-peninsula and includes several smaller settlements out of town. The village itself exhibits a very beautiful square surrounded by cafes, narrow streets, old houses and traditional flair. The area around Paliouri is characterized by mountains, pine forests, great natural formations and beautifully lagoons. With its tranquil shores and small ports it is also one of the most popular angle places in Halkidiki. This makes Paliouri and its environment certainly one of the most interesting places to visit. On royal decree the nearby area Chrousso was incorporated in 1918. Chrousso is notable for its pines, cliff scenery, enchanting natural beaches and the wonderful area around ‘Porto Valitza’, which itself has a impressive lagoon and a small harbor. During the summer month events are talking place at a small amphitheatre.

Southeast of Paliouri the small settlement Xyna is located only 6km away from the Kanistro-Cape and the end of the Toroneos-Bay. After 2 more km you reach the village of Agios Nikolaos with its charming landscape with two picturesque bays, a natural harbor and a tiny peninsula with the small, historic church ‘St. Nikolaos’ on it. The small church was built by using the stones of an ancient temple of Apollon whose structures and reliefs still can been identified in the walls. The name Paliouri refers to the Greek expression ‘Paliouria'(παλιούρια) and can be translated into ‘spini shrubs’ based on the habit in former times when these shrubs were used to fence the parcel around houses.

Paliouri is known for its production of honey and olive oil which supplies the entire region. In addition to beekeeping and Olive-production- / processing the main occupation and principal source of income of the local population, (especially in the surrounding villages) is the tourism. In ancient times the city Theramvos was located on this territory. This has been referenced in the scripts of Herodot. Archaeological discoveries in the area and near the bay confirm the existence of this former city. According to Herodot, the inhabitants of the city were forcibly recruited by the Persian king Xerxes during the second Persian war (480 BC.). This could provide an explanation why the city was not mentioned again on a later point by further writers. The residents of Paliouri participated in the revolution of 1821.

Find out more or adjust your settings.

This website uses cookies so that we can provide you with the best user experience possible. Cookie information is stored in your browser and performs functions such as recognising you when you return to our website and helping our team to understand which sections of the website you find most interesting and useful.

Strictly Necessary Cookie should be enabled at all times so that we can save your preferences for cookie settings.

If you disable this cookie, we will not be able to save your preferences. This means that every time you visit this website you will need to enable or disable cookies again.

This website uses Google Analytics to collect anonymous information such as the number of visitors to the site, and the most popular pages.

Please enable Strictly Necessary Cookies first so that we can save your preferences!